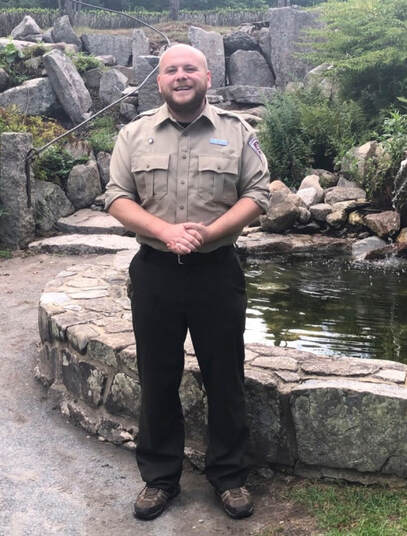 You might catch him most days, cataloging artifacts, scheduling tours or transcribing Oakes’s diary (which Oakes kept a daily record of from 1898 to his death in 1950). However, aside from his daily routine, Paul Clifford, Visitor Services Supervisor at Borderland State Park, goes above and beyond when it comes to not only preserving the tangibles in and around the palatial mansion but also keeping the treasured stories connected to Blanche and her husband, Oakes Ames, alive.

Paul grew up in Foxboro, a two-mile drive to the Borderland State Park, a trip he’d made frequently as a boy. “It truly feels like I’ve come full circle,” he explained, not having realized at the time the impact that those visits would have on his future career trajectory. It was a high school experience, years later, where he participated in environmental sciences competition at Borderland that further ignited his love of nature and started him on his current path. After graduating from Foxboro High, Paul went on to earn a B.S. in Environmental Science from Franklin Pierce, after which he landed a job as a Park Interpreter at Blackstone Heritage State Park in Uxbridge, MA. A year later he transitioned to Borderland where he currently assists Borderland’s Park Supervisor, Andrew Buckley, with responsibilities ranging from land management, to archiving precious relics and overseeing special events.

Clifford, a history enthusiast, true adventurist and lover of all things nature, prefers adventure trips over leisurely vacations, which is something he and Blanche have in common and is also likely the reason why he's made it his personal mission to make Blanche Ames a household name. Ask Paul anything about the Ames family and in minute detail he can explain how Blanche raised turkeys, even going so far as to create disease resistant breeds; or how the Borderland State Park main telephone number is the same number that the Ames’s used at their family residence, minus the area code.

Since the pandemic, things have gone uncharacteristically silent in the big old estate. The recent COVID uptick has resulted in the cancellation of three upcoming, in-person screenings of the Borderland documentary. However, Paul, a true optimist by nature, is confident that next year will be a better year. And that’s a good thing given that the year 2022 marks the 50th anniversary of both the opening of Borderland State Park as well as the incorporation of ‘Friends of Borderland’ (the very first estate friends group that was founded by Oakes Ames Plimpton, Blanche’s granddaughter). Paul, along with the 'Friends of Borderland,' plan to mark the special day with a celebration in early summer, bringing together local vendors, businesses, non-profits and community members.

Thank you, Paul, for always putting your best efforts forward, for your careful attendance to the estate’s many precious keepsakes and for breathing new life into the centuries old legacy of Blanche and Oakes Ames. We look forward to commemorating the anniversary and celebrating with you -in person -in the very near future!
​