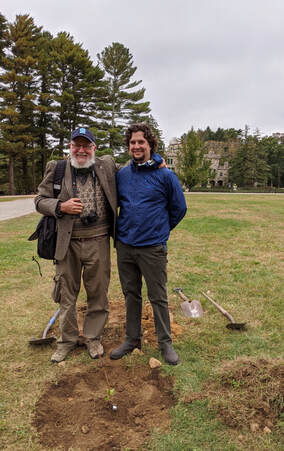 The scrappy tree, barely two feet tall, sits about 100 yards on the northeast front lawn of the Borderland Estate and is considered an ‘exceptional breed.’ It will be years before it reaches maturity, along the way, its ever-curling, corkscrewing branches taking on their own bold, unique form. It will be unlike most other crabapple trees in existence. Which is why it was fittingly named after one extraordinary individual – an individual also considered a rare breed in her day.

The story stretches all the way back to 1939 when then, Director of Harvard’s Arnold Arboretum, Karl Sax, selected tiny seedlings from a top breed of Malus spectabilis ‘Riversii.’ Quick point of fact: crabapple seeds have significantly more genes than humans, each seed producing something entirely unique. Sax planted a hundred or so from his A-list batch, then…he waited.

It would be another two decades before the propagated seedlings would fully reveal themselves. And thus, in 1955, one of the standout offspring from the group with its aesthetically pleasing, pinkish-white blossoms and twining limbs, known only as Sax#6639, was in need of a name. It's customary to do so – name a tree after someone, especially those individuals deserving of such an honor. In Karl Sax’s view there was no individual more fitting. That individual, he decided, was Blanche Ames. She was seventy-seven at the time.

Karl Sax befriended Oakes and Blanche Ames while earning his PHD at Harvard. The three, along with Karl’s wife, Hallie Jolivette Sax (also a botanist with a doctorate from Stanford), held many common interests, political causes and their love of nature among them. Blanche, an activist, outspoken leader of the women’s suffrage movement and skilled artist, went on to illustrate all seven volumes of her husband Oakes’ work; Orchidaceae: Illustrations and Studies of the Family Orchidaceae. She is recognized as one of the foremost botanical illustrators of her time.

Fast-forward to 2018, Alan Sax, Karl’s grandson and crabapple tree aficionado, with a wide-ranging interest in horticulture, attended a birthday party at the Borderland estate in honor of his great uncle, Eddie Sax's, birthday. Also in attendance were Ed’s daughters, Laura Figlewski and Vicky Sax, Ella Pastore (Vicky’s daughter), Alan’s wife, Sue Schwartz and their tour guide, Borderland visitor service supervisor, Paul Clifford. One private tour and picnic later, Alan had an epiphany. However, before floating the idea of planting a Blanche Ames crabapple tree on the Borderland grounds he did his homework.

Alan called around to several nurseries in search the rare cultivar, before soon realizing he needed to start from scratch. Producing a tree clone is no easy feat however, Alan was determined. The Arnold Arboretum donated scion wood from the Blanche Ames original. Jonathan Carr of Cider House and Preservation Orchards provided the rootstock. And, no, this couldn’t just be any old, standard issue, rootstock. It needed to be hearty, resilient, accepting of grafts - like the ones grown at Carr’s Orchard in Hadley MA. Rootstock and scion wood in hand, Alan, along with his friend and horticulture co-conspirator, Matt Kaminsky, set to workcutting small, z-shaped notches into the root then affixing the scion wood with grafting paste. Four of the clones took; one was presented to Smith College (Blanche’s alma mater); another to the Connecticut College Arboretum; one, Alan kept one for himself; the fourth went to Borderland.

Both Alan and his son, Miles Schwartz Sax (current Director of Connecticut College Arboretum) were present during the ceremonial planting, which took place on a crisp, sunny day on the 5th of October 2020. The ritualistic gathering, highly symbolic of the common bonds between the two families - their shared love of nature and human rights issues now passed down through the ages. Alan Sax had learned to speak the language of horticulture at an early age. “Growing up in our household we wouldn’t just say ‘day lilies,’ we’d say Hemerocallis,” he said. Alan also has vivid memories of visiting Borderland as a boy. He recalls frogs bathing in the freshwater pool and the giant Chinese dragon statue just beyond the pool that spouted water. He passed the torch to his son, Miles, who had heard the many stories and not surprisingly developed his own love for plants. Like his dad, Miles spent his childhood immersed in the outdoors, romping through forests and fields, identifying different breeds of flowers, trees and shrubs - digging up dirt in the literal sense. During his apprenticeship at the Arnold Arboretum, Miles was tasked with rehabilitating his great grandfather, Karl Sax’s, apple collection and stumbled upon a rare, Japanese breed that had been misidentified. It was a significant find! A bit cliché, yet fitting to say that the apple truly doesn’t fall far!

Now, the bare-branched stick of a tree sits patiently, encased under a wooden canopy in order to shield it from the elements, a mere fraction of its wild, highly unique, future self.  In due time its roots will grab firm and it will push out limbs, growing in size to approximately fifteen feet high by twenty feet wide. During its blooming phase in early spring it will take on the persona of a giant, scented, powder puff after which it will shed its petals for clusters of green and pink-blushed, bite-sized fruit. Its story, four generations and counting of Sax and Ames family ties and bloodlines, will endure for decades to come. So, too will the memory of Blanche Ames - through her remarkable feats, her well-preserved estate and now, thanks to the Sax family - her aptly named crabapple tree that will one day prove to be just as magnificent.

Thank you to Miles Schwartz Sax and Alan Sax for your invaluable contributions to this story.

Alan Sax earned a B.S. from Michigan School of Natural Resources. Alan has had a life-long interest in horticulture and social change work. Most of his professional life he worked for and managed non-profit organizations. He also ran a small café in Greenfield, Connecticut for four years and managed a number of food related, small businesses before retirement. Alan is an active member of his community, organizing Franklin County’s annual ‘CiderDays’ event on the first full weekend in November.

Miles Schwartz Sax is the current Director of the Connecticut College Arboretum. He grew up in Western Massachusetts, an ideal setting for which to foster his love of plants and nature. After graduating from Cornell University with a PHD in Horticultural biology, he completed a two and a half year apprenticeship at Harvard’s Arnold Arboretum where he studied a number of different species of crabapples from around the world. He continued his training at the Morton Arboretum, Cornell Botanic Gardens and the Stellenbosch University Botanical Gardens in South Africa. In his current role he is dedicated to “issues relating to urban horticulture, tree selection, stress physiology and rare plant conservation in the context of an increasingly urbanizing and warming planet.”

Watch a video of the tree planting ceremony